Rottnest unveils a stunning new jewel in its crown
10 December, 2021

A spectacular new sculpture to welcome visitors to Rottnest Island (Wadjemup) has been opened as the Island prepares to deliver an even better experience for visitors this summer.

The nine-metre-high sculpture, depicting a Noongar warrior and breaching whale, puts the finishing touch to a range of improvements and upgrades to embrace the Island’s cultural heritage and ensure the long-term sustainability of WA’s beloved tourist destination.

Tourism Minister David Templeman and Federal Member for Stirling Vince Connelly MP, representing the Minister for Trade, Tourism and Investment, the Hon Dan Tehan MP, unveiled the $350,000 artwork which is part of a joint investment by the State and Commonwealth Governments.

Called Koora-Yeye-Boordawan-Kalyakoorl (Past-Present-Future-Forever), the sculpture has been constructed in limestone, concrete and aluminium, and creates a powerful statement at the end of the main ferry jetty.

The sculpture is the work of Western Australian artists Sharyn Egan and Jahne Rees who have worked on the installation since April, with significant input from the Whadjuk Noongar community.

Two other significant Island projects were also opened as part of a $17.2 million investment from the Commonwealth’s National Tourism Icons Program: 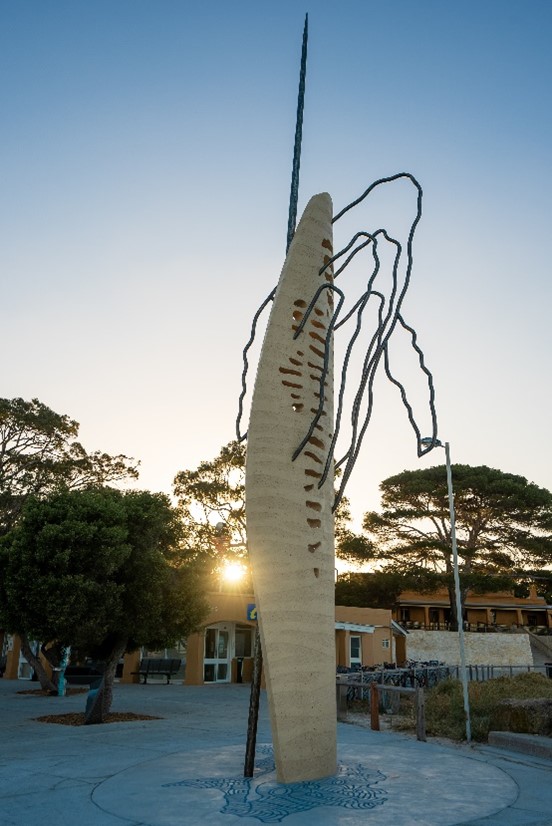 WA artists Jahne Rees and Sharyn Egan at the base of the sculpture.