Rottnest (Wadjemup) has a newly-named vessel for use by the Island’s rangers.

‘Kwila’, the Noongar word for shark, has been applied to one of the ranger vessels previously known as ‘Ranger 2’.

The new name was chosen by Clontarf students at the 2020 Wadjemup Cup, Rottnest’s annual AFL tournament contested by Clontarf academies from across WA.

The new artwork for the vessel was designed by WA Aboriginal artist Peter Farmer Jnr. The artwork pays tribute to Wadjemup and its surroundings waters by featuring its important marine ecosystem.

The renaming took place on Wadjemup as part of National Reconciliation Week (May 27-June 3).

RIA Executive Director Jason Banks said the new artwork was symbolic of the authority’s commitment to embedding acknowledgment of the Island’s traditional owners in all aspects of its work. 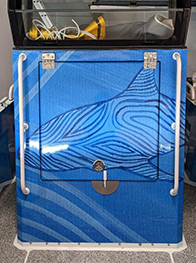