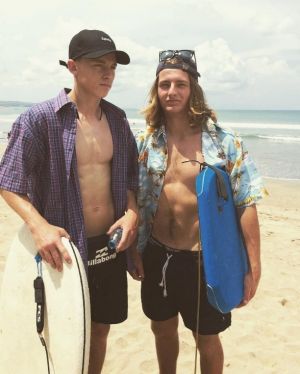 An Australian teenager, thought to be a school leaver in Bali, could face up to 12 years in jail after he was allegedly caught with a small packet of white powder by security guards at a Kuta nightclub.

Jamie Murphy from Perth was detained some time after 1am local time on Tuesday at the nightclub Skygarden.
The 18-year-old was held overnight at Kuta precinct.
Kuta Police Chief Commissioner Wayan Sumara said a white crystal substance was found on the teen but it is yet to be confirmed what it is.
"The evidence is still being tested," Mr Sumara told reporters. Police suspect it is cocaine or heroin.
Mr Murphy will remain "locked up" until the substance is confirmed. He has been subjected to urine and blood tests to see if he consumed any of the substance.
"He [the Australian] said he got it from one of the people on the street," Mr Sumara said. "We will check with his group whether he is part of schoolies or not."
It is believed Mr Murphy arrived in Kuta on Sunday with two friends.
Nine News Perth reported the teen being detained was caught on camera.
Footage appears to show the teenager being held in a tight grip by a security guard, pleading with him and professing his innocence.
"No, I haven't taken it," Mr Murphy can be heard saying. "It's not mine...what are you doing, it is not mine.
"This is a f---ing show. I don't do this sh--t, I only drink."
Nine News reported the teenager was searched when he entered the nightclub and the security guards discovered the white powder in a waist bag.
It is understood the man could face up to 12 years in prison and an $800,000 fine if he is convicted with possessing illicit drugs.
Denpasar police narcotics chief Gede Ganefo said on Tuesday police could hold the teenager for up to six days before placing any charges.
It is understood his family and the Australian consulate have not yet been contacted by Kuta police.
Denpasar police forensic unit chief Koesnadi said a preliminary test on the powder could be completed within hours, but the official testing would take up to four days.
"Urine and blood test will take about the same time to complete," he said.
Kuta police criminal unit chief inspector Ario Seno said the teenager was "doing fine" in police custody.
"We need time to test the evidence before we can determine his status. He is not arrested, he's just being detained," he said.
Seno said Murphy said "he bought it from the someone from the street."
"We didn't ask how much he paid for it."
"Since he bought it, it proved intent. But he could be duped by the seller [with fake drugs], that's why, until we get the test result, he remains in custody but not arrested."
"Just detained."
Mr Murphy, according to his Facebook profile, attended Ellenbrook Secondary College and played soccer for Bayswater City Soccer Club.
Meanwhile, back in Perth, a 17-year-old school leaver was evicted from Rottnest Island on Monday after being deemed a public nuisance by police.
He was told to leave immediately after taking someone's rented bike, having been on the island for a mere three hours.
He reportedly won't be allowed back for seven days.
Earlier this week a disturbing video emerged of a man giving vodka to a quokka.
Footage posted to Snapchat on Saturday showed people laughing and watching on as a man poured a vodka UDL into a quokka's mouth during the group's alcohol-fuelled stay on the island.
Twenty police officers are stationed on the island to monitor the school leavers celebration over the next week.