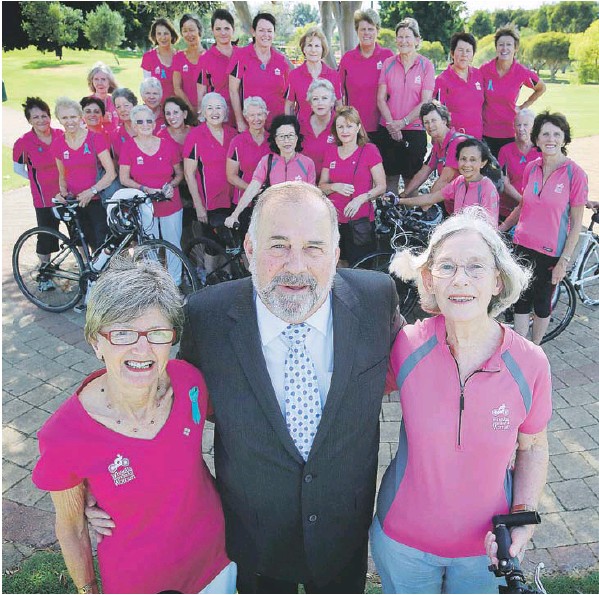 A STIRLING women’s cycling group has rallied around a long-time member who is battling ovarian cancer.

Janice Maher said she had not ridden a bike since she was a teenager until she joined the Wheelie Wonderful Women three years ago.

“I’ve been on cycling trips all over, from Rottnest to Margaret River.”

Since the ovarian cancer diagnosis in September, the women from the group have organised a roster to take Mrs Maher to her chemotherapy sessions.

“It’s just the most magical thing; it’s made me very tearful at times,” she said.

“I’m just so lucky to be involved and have the support and friendship of this group.”

The cycling courses were the brainchild of City of Stirling sustainability project manager Joanne Burgess, who started cycling programs for women who wanted to get back on their bikes in 2010.

“From those courses the ladies went on to form the Wheelie Wonderful Women,” Ms Burgess said.

Group member Norma Willmott, who joined the group when she was 74, celebrated her 80th birthday last week.

“I remember the first time I rode down to Midland and it was something I’d never dreamt I could do,” Mrs Willmott said.

“For the girls now that’s just a morning warm up.”

Mrs Willmott said she had dusted off a bike that had been sitting in her shed for 12 months.

“I saw the advertisement in the Stirling Times for a riding course for people who were rusty riders or had never learnt to ride,” she said.

“It’s been really wonderful not only for exercising but getting to know so many like-minded women.”

Mrs Maher said she was coping well with treatment and hoped to get back on the bike soon with the help of her friends from the group.