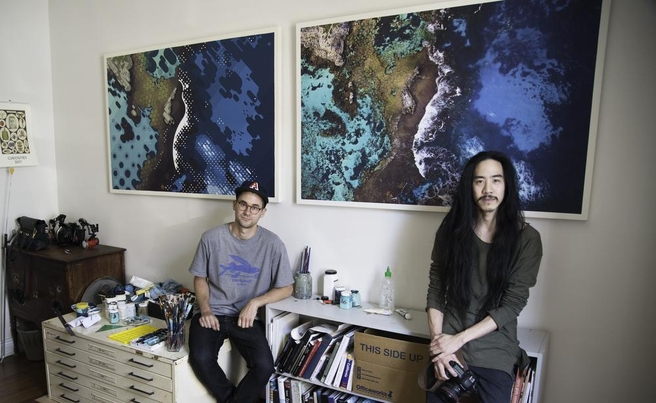 He parallels between painting and photography — the latter of which, if you define it as the projection of an image on to a surface independent of a method of chemically or digitally fixing that image, has existed for centuries — are well-known.

Many painters use photography to varying degrees, from an aide-memoire through to literal transcriptions which are rarely successful.
This is just as true for landscape painting and photography, whether aerial or the earth-bound variety, and one can only imagine what friends and fellow aerial travellers, photographer Richard Woldendorp and painter Robert Juniper, might have done had they been in the place of photographer Jarrad Seng and painter Amok Island. The latter pair’s original, thought-provoking and beautiful collaboration, Parallels opens at Fremantle’s PS Art Space on December 9.
Seng has worked on projects with high-profile artists and brands including Passenger, Ed Sheeran, Qantas, Converse and tourism bodies around the world. Amsterdam-born Amok Island is known for his large, nature-inspired murals that can be found in more than 20 countries. He has also exhibited in Australia, the Netherlands and Japan.
Parallels presents nine sets of aerial images — one a photograph, one a near- abstract interpretation of that photograph, so 18 pieces in all — of Rottnest Island as seen from a light aircraft.
“I think that’s what so interesting about this project, and why I was so keen to collaborate with Xander (Amok Island),” Jarrad says. “It’s really something different.
“ Showcasing the same subject matter side by side but interpreted in really different ways. The highly textured photographs are probably more what the audience is accustomed to. But by putting them together with Xander’s minimalist abstract interpretations, it elevates both.”
The result is a less passive way of looking. One is encouraged literally to find parallels between the two pieces in each pair. “Hopefully the audience spends a lot more time than usual looking between the two,” Jarrad says. “You can find a specific detail in a photograph and see how Xander’s interpreted that. Then go back to the photograph.”
“I’m translating Jarrad’s photographs into my own visual language,” Xander says. “I make all kinds of rules for myself. For example, the waves I translate into dots and bring out more cubist qualities. I’m balancing on that fine line between abstraction and a realistic representation of Jarrad’s photo. But I’m pretty happy for people to see them as abstract works of art.”
Jarrad says the collaboration started in the plane. “I work quite a bit for tourism bodies and I’m in the air quite often.
“So the aerial landscape genre is very familiar to me. What made this project special was working so closely with Xander. I’d be shooting these images but consulting with him the whole time regarding texture and framing and so on. And that made me look at the landscape differently.”
“Landscape painting in this form is quite a new thing for me,” Xander says. “It’s only now that I’ve got close enough to an individual style to really think about an exhibition. Which is this one.”
Parallels is at PS Art Space, Fremantle from December 9-22. Amok Island’s Fitzgerald Biosphere is also showing in conjunction with Pilbara-based painter Doreen Chapman’s self-titled exhibition at FORM Gallery, Perth.